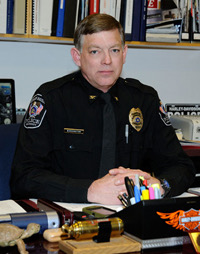 Chief Boddington was born and raised in York County and graduated from York College with a degree in Criminal Justice. He started with the Shrewsbury Borough Police Department in 1978 and received his Act 120 Training at the Pennsylvania State Police Academy in Hershey. He worked full time for the Shrewsbury Borough Police Department through 1992 when the regional department was formed. He has been the departments firearms instructor, photographer, community policing officer, and bicycle patrol officer. He spent time with the York county Drug Task Force, and 10 years as the DARE Officer for the Southern York County School District.  He was promoted to Chief of Police in 2010.